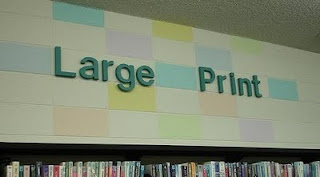 For those book groups that require a large print copy, here is a list of kit titles that can meet that need:

And the Mountains Echoed
The Age of Miracles
The Art Forger
The Art of Fielding
The Art of Racing in the Rain
Beautiful Ruins
Before I Go to Sleep
Behold the Dreamers
Being Mortal
The Boys in the Boat
The Brief Wondrous Life of Oscar Wao
The Buddha in the Attic
The Burgess Boys
Burning Marguerite
Caleb's Crossing
The Chaperone
Circling the Sun
Close Your Eyes, Hold Hands
Dead Wake: The Last Crossing of the Lusitania
The Distant Hours
The Dry Grass of August
The End of Your Life Book Club
Etta and Otto and Russell and James
Euphoria
Everyone Brave Is Forgiven
Eye Contact
Faithful Place
Flight Behavior
Garden Spells
Girl Waits with Gun
The Girl with the Dragon Tattoo
The Girl You Left Behind
The Guernsey Literary and Potato Peel Pie Society
The Help
Here If You Need Me: A True Story
Homegoing
The Immortal Life of Henrietta Lacks
In the Unlikely Event
In the Woods
In the Garden of Beasts: Love, Terror, and an American Family in Hitler's Berlin
The Invention of Wings
A Land More Kind Than Home
The Language of Flowers
The Last Runaway
The Leftovers
Life After Life
The Light Between Oceans
Lily and the Octopus
Little Bee
The Lobster Chronicles: Life on a Very Small Island
Major Pettigrew's Last Stand
A Man Called Ove
The Marriage of Opposites
The Memory Keeper's Daughter
The Muralist
Mr. Penumbra's 24-Hour Bookstore
The Museum of Extraordinary Things
My Sister's Keeper
News of the World
The Night Circus
The Ocean at the End of the Lane
Olive Kitteridge
The One-in-a-Million Boy
The Orchardist
Out Stealing Horses
The Painted Girls
The Paris Wife
The Particular Sadness of Lemon Cake
The Red Garden
Red Hook Road
A Reliable Wife
Room
The Round House
Rules of Civility
Saint Mazie
Sarah's Key
The Sense of an Ending
Shanghai Girls
The Signature of All Things
Sister
Sisterland
Skeletons at the Feast
The Snow Child
The Sound of a Wild Snail Eating
State of Wonder
Station Eleven
Still Alice
The Storied Life of A. J. Fikry
Strength in What Remains
The Time Traveler's Wife
To the Bright Edge of the World
Under the Wide and Starry Sky
Us
The Vacationers
A Visit from the Goon Squad
Water for Elephants
We Are All Completely Beside Ourselves
The Weird Sisters
Where'd You Go, Bernadette
The Widower's Tale
Wild: From Lost to Found on the Pacific Crest Trail
The Wright Brothers

The following kit has 14 regular print copies and one audio version:

Shadow Divers: The True Adventure of Two Americans Who Risked Everything to Solve One of the Last Mysteries of World War II

The above kit is the ONLY one containing an audio. The RTG committee had many discussions about including an audio edition in a kit. We decided against it for a number of reasons:

Cost--audios tend to be priced higher than books. An audio version may cost two or three times more depending on vendor (and may have to be special ordered from a vendor that a library does not normally deal with).

Audios require tracking--someone has to make sure all disks are returned and are undamaged. If one or more are damaged, then there is the replacement problem to deal with.

Audios are fragile and may be easily damaged in a bag with 14 books.

Not every title comes in an audio version.

Photo by Travelin' Librarian
Posted by KURIOUS KITTY at 1:25 PM